Tottenham Hotspur drew 2-2 with Rennes on Thursday evening, in the club’s first game of the Europa Conference League.

Nuno Espirito Santo’s side took the lead early on, thanks to an own goal from Loic Bade after a cross from Lucas Moura. Rennes then hit back, with goals from Flavien Tait and Gaetan Laborde.

Spurs then managed to level the match 2-2, with Pierre-Emile Hojbjerg coming up with the goods after being brought on. Espirito Santo spoke about injuries after the match, with the manager frustrated as more players were added to the list of those unavailable.

Meanwhile, the French slant on the result was one of relief for Rennes, who had been struggling with their early season form. Goalscorer Laborde, who arrived from Montpellier in the summer, spoke after the match and made clear what a big deal it was for the club to get a good result against the Premier League side.

Quoted by Ouest France, the striker said: “We must not forget that in front of us was a big team. Tottenham is one of the top clubs in Europe. It was a test for us and we did well.”

When it was put to him that it was a much better experience than Sunday’s 2-0 loss to Reims, Laborde said: “It sure is and it could not be better. We can be proud of our service. It was important to us to react and we did it well. The atmosphere was great, it 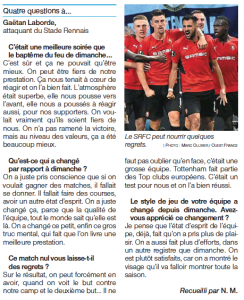 pushes us forward, it pushed us to react too, for our supporters. We really wanted them to be proud of us. We did not bring home the victory, but in terms of value, it was much better.”

Tottenham’s next match in the Conference League is on September 30th against NS Mura.