Former Watford midfielder Pape Gueye has been suspended by FIFA from playing for Senegal at the African Cup of Nations due to a dispute with the Hornets.

Watford are still in dispute with the French side regarding Gueye’s move to the club from Le Havre in June 2020, as L’Equipe explain today.

The Hornets have been arguing about the move since 2019, having claimed that they had signed a pre-contract agreement with the player when he was leaving Le Havre.

They ‘made him sign’ a five-year deal until January 2020 with a salary that tripled what he was earning at the time, alongside a signing bonus of £800,000.

However, Gueye never made the move to Vicarage Road. At the beginning of 2020, he and his father changed representatives, and they found ‘many flaws’ in the contract he had signed, including a ‘decreasingly salary’ should he end up at Udinese.

At the end of April 2020, Watford publicly announce the signing of Gueye, but several French sides had ‘got wind’ of the turnaround and made their move.

While Angers wanted him to break his contract with Watford, Marseille were not as bothered and signed the player to a four-year deal in July.

He’s since made 61 appearances for them, but Watford are seeking compensation, believing they’ve lost out on around €5m. 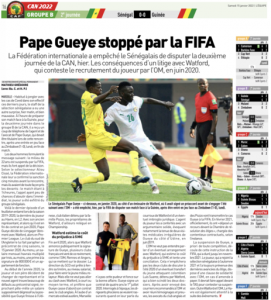 Marseille have resisted this and are ‘reassuring’ when asked about Watford’s case, with the player’s agent providing them with a ‘solid argument’.

The French side ‘does not want to hear about a possible settlement’ with Watford and are trying to ‘reconcile’ the issue with the Premier League side. Watford aren’t interested, though, and took the case to FIFA in February in 2021.

That’s yet to be resolved and so he has now been banned from Senegal’s games at the AFCON, despite having been a late substitute against Zimbabwe on Monday.