As often happens ahead of Celtic’s matches in the Champions League, the press of the opposing team manage to dig out a former Rangers player and ask for comments.

With Brendan Rodgers’ men facing Anderlecht on Tuesday evening, Thomas Buffel was a good choice for the Belgian media. Representing Rangers from 2005-2008, the former Ibrox player was asked to give his comments on what Anderlecht’s players can expect at Celtic Park.

Buffel represented Rangers at a much better time for the club. He won the Scottish Premiership in his first Ibrox season, along with the Scottish League Cup, and even got to the last 16 of the Champions League.

Now Celtic are the only Champions League team in Glasgow, and Graeme Murty is trying his best to steady the Rangers ship. A positive away win at the weekend to Aberdeen was aided by goals from Danny Wilson and Josh Windass, but Murty’s time looks to be coming to an end as Rangers are eager to appoint a permanent manager.

Het Belang van Limburg quote Buffel as saying about Celtic: “First and foremost, the stadium is always packed, 60,000 Scots who sing loudly, that makes an impression. Furthermore, the overwhelming majority of the fans come from the working class. They are atmosphere makers. 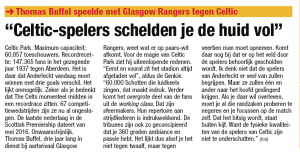 “Their collection of battle songs is impressive. The stands are also designed so that you have a 360 degree ambiance and passion. So it seems like you don’t have to take on twelve, but are against fourteen men.”

The former Rangers player seemed to speak from personal experience of matches against Celtic, when he added: “In addition, there’s a lot of abuse on the pitch by the players. I don’t think Anderlecht’s players will understand much of it. If you want to survive there, you must try to ignore all those peripheral issues and focus on the match itself.”

Meanwhile, Rodgers will be confident of taking Celtic through to the Europa League, and the team will be concentrating on Anderlecht, and perhaps giving their players some ‘abuse’.