Over the past few days, reports coming out of France and Italy have explained that Inter Milan are interested in N’Golo Kanté and their CEO Giuseppe Marotta and sporting director Piero Ausilio could ‘facilitate’ negotiations with Chelsea for his signing.

Antonio Conte remains a big admirer of the midfielder and it was suggested the Serie A side failed in their attempts to take the 29-year-old to San Siro in the summer transfer window.

Luis Suárez Miramontes, who played for the Italian club in the 60s, and managed the Nerazzurri on two different occasions in the past, has given an interview to AS.

The former Inter manager has revealed the attempt made by Conte’s side’s for the France international in the last window was turned down by the Blues.

“…they [Inter] lack a player of a certain hierarchy in the centre of the field who leads the game,” he said. 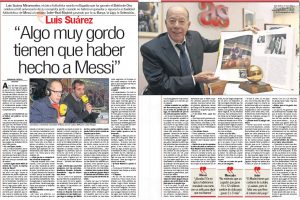 “They [Inter] have not signed him because Chelsea did not want to [sell him]. Here they wanted to pay in millions.”

Suárez’s comments would suggest has had had first hand information that Chelsea rejected an approach made by Inter for Kanté.