According to Fotomac, former Manchester City midfielder Fernando has spoken to Fabian Delph and invited him to join Galatasaray.

It’s been well documented in the Turkish press Galatasaray are interested in signing the Manchester City midfielder after reports they see him as an alternative to their first choice Ever Banega.

Today Fotomac reports Fernando has advised Delph about playing in the Super Lig and spoken well about the possibility of signing for the Turkish champions.

Fernando has spent the past two seasons with Gala after arriving from Manchester City in 2017.

Mainly used by Pep Guardiola as a left back for the past three seasons, Galatasaray could offer Delph a role in midfield and also regular football in the Champions League. 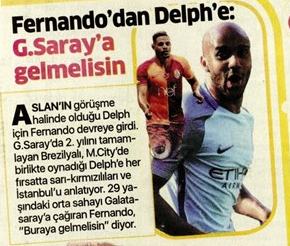 The Istanbul club are guaranteed a place in the competition’s group stages after winning the Super Lig for the second time in as many years.

The 29 year old is under contract with the Premier League champions until June 2020.