Arsenal host Villarreal in the second leg of their Europa League semi-final clash at the Emirates on Thursday. The first leg went in the La Liga side’s favour with them registering a 2-1 win at home.

Nicolas Pépé’s second half penalty saw the Gunners score the crucial away goal and also helped them retain hope of overcoming the first leg deficit.

Robert Pires played for both the clubs during his playing career and the Frenchman spoke to AS prior to the tie last week.

Ahead of the return leg, Wednesday’s edition of AS interviewed Santi Cazorla, who has also received love and appreciation from the supporters of both the Yellow Submarine and the north London club.

Mikel Arteta’s side have struggled in domestic competitions this season. In the league, they are ninth in the table with 49 points and are 12 points behind fourth place Chelsea.

Asked to give his take on the current situation at Arsenal, Cazorla said: “Few players still remain from my time [at Arsenal]. The coach was a colleague of mine, there is Bellerín, Xhaka… many of the young people were already at the club, but I did not coincide with them, which means that I do not know them too well.

“They are in a phase of change after the departure of Arsene Wenger, and everyone knows that these kinds of changes cost.

“Mikel is a good coach, he knows the club very well and is clear about what he wants, but it is not easy. They have the option of this final, which can save them the season, since in the league they are not in a very good position.” 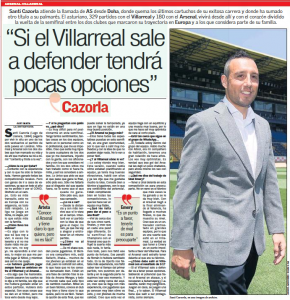 Cazorla, who is currently at Qatari side Al Sadd, believes Arsenal will make it hard for Unai Emery’s men in London on Thursday.

“They have all the expectations set in this semi-final, it is a great opportunity, so they will come out very motivated and with the idea that they can leave nothing. They’re not going to make it easy,” he explained.