Far be it for us to judge from afar, but it’s not too hard to come to the conclusion that Lazar Markovic could do with new representation.

The Liverpool player has seen a very promising career turn into a mess over the past few years, which is a shame given his undeniable talent. When it became clear there was no place at Anfield for the Serbian, that’s when those who represent the footballer should have planned a way forward, but instead it’s just been stumbling from one hastily arranged loan to another.

He moved to Fenerbahce on August 30th 2015, and then to Sporting on August 31st 2016, he was then recalled and sent to Hull City for the rest of the season. The first half of the 2017/18 campaign was wasted as an outcast at Melwood, and he then moved to Anderlecht very late on January 31st of this year.

It was so late there was no time for a medical, and Anderlecht had to trust the word of Liverpool’s medical team. When Markovic actually arrived in Belgium and started training, there was shock at how unfit the footballer was.

The loan was looking to be a disaster, but then Markovic fought back and against all odds he did well, turning a corner.

So this summer it may have been expected that those representing him would have had something lined up. Put pressure on Liverpool for a nominal fee and then gone out and found somewhere Markovic could rebuild his career.

Yet the months and weeks went by and on August 31st Markovic was in Greece negotiating a move to PAOK. That was expected to go through, but then collapsed, and Anderlecht swooped in for a permanent deal. So off the footballer flew.

As covered by HLN in Belgium on Saturday, and the Liverpool Echo on Friday, a fee of £2.9m was agreed. 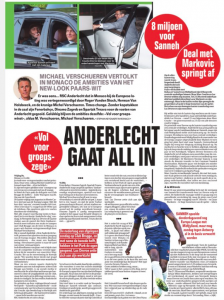 The Liverpool player and his agent arrived at Anderlecht’s offices at 9.30pm, and then began two hours of talks… which led to nothing.

Now there’s the prospect of no football, unless things change dramatically under Jurgen Klopp.

Alternatively, the agents can see which windows remain open. Those include Bulgaria, Czech Republic, Mexico, Portugal and Slovakia.