Home Europe ‘First offer’ could come from Wolves – Barcelona have edged away from...
SHARE

In his final months at Barcelona, technical director Eric Abidal had drawn up a list of targets for the summer window. One of the options he was looking for was a back-up to Jordi Alba at left back.

Abidal left shortly afterwards and his recommendations will no longer hold weight.

Monday’s edition of L’Equipe reports there’s widespread interest in the 19 year old, and they push Wolves forward as an option. Aït-Nouri is represented by Jorge Mendes, and it’s thought the super-agent will look to place his player at a club where he already has good links.

Wolves fit that description, and it’s stated the ‘first offer’ could come from the Premier League club. Unsurprisingly, Atletico Madrid also get a mention, another club with Mendes links. 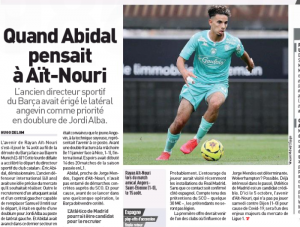 Links to Wolves may well be to help market Aït-Nouri, and it doesn’t feel like there’s anything concrete for him yet.