Home Europe “First we have coffee” – Dutchman explains how eager coach was at...
SHARE

Former Southampton coach Erwin Koeman has revealed how he had temper Sammy Lee’s enthusiasm during his time at the club.

Koeman was an assistant to his brother at Southampton between 2014 and 2016 before the pair left Saint Mary’s to join Everton.

Part of the coaching team during their two-year tenure was Sammy Lee, the former midfielder who also happened to play for Southampton on loan from Osasuna in 1989-90.

He would only make two appearances for the club on that spell but still, had an association with them that could help Koeman’s new foreign regime.

Lee is well known in England having worked at various clubs during his coaching career too, meaning his extensive knowledge of the English game was a welcome addition to Koeman’s knowledge pool as well.

It seems, though, the former Liverpool man had a different way of working than his Dutch counterparts, something his brother revealed to De Telegraaf.

“At Southampton, Ronald brought in former player Sammy Lee, an icon from the ’70s and ’80s,” he told the newspaper. 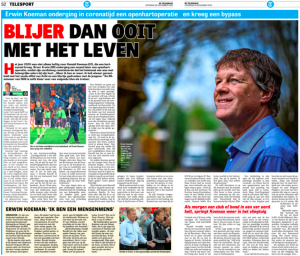 “I also found myself a fan. When I came to the club at eight o’clock in the morning, he was already an hour and a half in his tracksuit.

“He immediately asked: ‘What are we gonna do today, Erwin? Then I said: ‘Easy, Sammy. First, we have a cup of coffee!’”