Home Europe ‘The fireman who takes care of all the fires’ – Man United...
SHARE

When Bruno Fernandes started succeeding at Manchester United, the Portuguese media sounded glad about it, but never surprised.

The midfielder had been doing the same for Sporting for years, and only took it to a new level in the Premier League.

Now as the midfielder has 38 goals and 24 assists in 74 appearances for the Red Devils, it’s hard even for the most fervent rival fans not to be impressed, and the pride from the midfielder’s home country is shown in a column from journalist Rui Dias featured in Record today.

With a headline saying ‘A general who is a genius and a worker’, the piece can’t compliment Bruno Fernandes enough, and describes the Manchester United star in a way hardly seen with any other players in any European newspaper.

We’d need to translate the whole piece to get all the praises the midfielder gets, so we’ve only highlighted the most impressive bits to show all the love Record are showing for the Red Devils’ player. 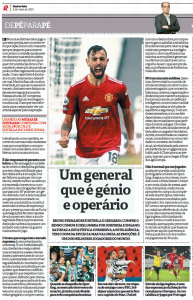 ‘The throne he occupies has the supreme shield of universal recognition. He’s an effective, obedient and responsible footballer but adds to these values ​​additional doses of a talent that he expresses with incredible regularity; he’s the fireman who takes care of all the fires and the architect who designs the building; a player who respects and fulfils the plan defined by the coach but lives to improve it in every way, offering him valuable elements only possible with the ball at his feet,’ Record says.

“BF is a sublime, talented, free and creative attacker, armed with fearsome weapons; an overwhelming midfielder, who concentrates leadership, charisma, organization and dynamics to keep the team running; and also an intelligent, focused and supportive defender, who sanctifies the virtues of balance and security.”

“It’s not normal for a player, whoever he is, even more Portuguese and from Sporting, to reach a world colossus like Manchester United and, in half a dozen months, assimilate, interpret, improve and appropriate himself in the field of the complex web of principles, values ​​and fundamentals conceived by the trainer. In less than a year, BF became the team’s epicentre, the club’s top reference and one of the biggest stars in the English league, ridiculing anyone who turned a nose at his signing, just for the prejudice of not believing he was capable of being what he was in sight that he already was: one of the best players in the world.”