As usually done on Mondays, the Portuguese media today forgets about the local league for a while and starts bringing the news on European competitions.

They only have Porto playing in the Champions League group stage this year, so the Dragons’ clash against Manchester City is very well covered.

Local Porto outlet O Jogo brings a few stories today, and highlights that Colombian midfielder Mateus Uribe is back in the team following recovery from injury.

Meanwhile, the Dragons will be missing Marko Grujic due to suspension, Mamadou Loum, who’s positive for Coronavirus, and probably their captain Pepe, who couldn’t recover from a foot injury. 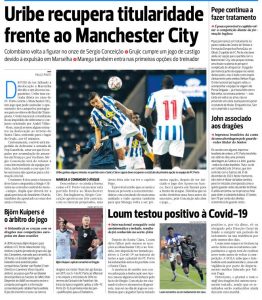 Still, the Portuguese media has no idea of how the Dragons will lineup against Manchester City. O Jogo says manager Sérgio Conceição will only release team news one hour before the game, as he won’t open up before that, and A Bola recalls that he surprised everyone when playing three defenders in England, so they can expect anything.

Whilst Manchester City have four wins in four Champions League games this season, Porto only lost one match, and that was the 3-1 defeat against Pep Guardiola’s side in the first fixture.

Both clubs have their places in the knock-out stage guaranteed, but in case Porto win 2-0 or a better result, then they could take the top of the group.