Not everybody in Argentina was completely convinced Emiliano Martinez acted in the right way on Saturday, as he played mind games with Bruno Fernandes ahead of the Manchester United player missing a penalty.

La Nacion seemed to be caught in two minds, with the newspaper saying it somewhat goes against what the Aston Villa player has said recently about being worried he doesn’t always set the best example.

However, those detractors were in short supply, and it’s clear that Argentina has fallen a little more in love with the goalkeeper.

Ole, a national sport newspaper, had a headline on Sunday reading ‘My favourite villain’, and they explained how Martinez managed to distract a penalty taker, just as he had done during Argentina’s victorious Copa America campaign.

According to Ole, he’s one of the ‘most lovable’ characters in the Argentina national team, and continues to live his ‘great moment’. 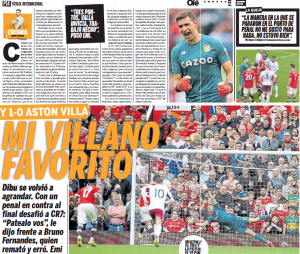 Added to his good performances and anything-to-win attitude, the Aston Villa player managed to work himself further into the hearts of his compatriots after he travelled to Argentina for the last international break, when the Premier League’s Brazilian contingent stayed home.