Wolverhampton Wanderers’ move for Fabio Silva in the summer has been labelled ‘difficult to understand’ as the youngster continues to struggle at Molineux.

That’s according to Mundo Deportivo, who say the fact the club has become ‘The Farmhouse of Jose Mendes’ is starting to unsettle the fans.

Silva joined Wolves in a €40m move from Porto in the summer in a deal that was widely criticised and questioned at the time.

Those doubts have proven to be founded, with the 18-year-old struggling to ‘perform at an acceptable level’ despite the long-term absence of Raul Jiménez.

So far, he’s managed just five goals in 29 games and has ‘neither connected good moves’ or been ‘decisive’ when given his chance, which led Wolves to bring in Willian José from Real Sociedad in January.

It’s stated that the club ‘went too far’ with the move for Silva, who, despite being a ‘great project’, could not justify such a price tag given he had little experience and had ‘not broken the mould’ either.

His arrival is now being seen as the straw that broke the camel’s back, with the arrival of so many Portuguese players under Mendes something that, according to Mundo Deportivo, ‘doesn’t sit well with the fans’.

The price paid is ‘one of those that is hard to understand’, and while Silva has time to prove his detractors wrong, the ‘clock is ticking against him’. 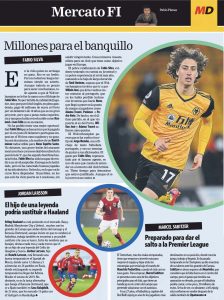 His lack of goals, and even assists, is not something anyone is happy with and looks even worse when Wolves players are shining out on loan.

Rafa Mir is the obvious example of this, with him managing 12 goals and one assist in 30 games for Huesca in La Liga this season.

He cost Wolves £1.8m from Valencia B back in 2018, and questions obviously need to be asked why he hasn’t been given his chance while the club are spending vast amounts on an unproven youngster instead.

Of course, there’s always time for Silva to turn things around, but it seems questions are now being asked.