In his first season back with AS Monaco after a troubled time in England, Radamel Falcao scored 21 Ligue 1 goals.

The next season he managed 18, again just counting the league, and this season the 33 year old is on 12, despite all the problems at the French principality club.

During his time with Manchester United and Chelsea, the Colombian scored a total of five Premier League goals. It just wouldn’t happen for him, with his time at Stamford Bridge appearing to slide further down than what had happened in Manchester.

When at United there some appreciation from supporters and a real desire for the player to succeed, given it wasn’t so long from him being one of Europe’s top strikers.

Louis van Gaal was Falcao’s manager at Manchester United, and he was under Jose Mourinho at Chelsea. Speaking to France Football, the footballer has been asked what he learned from those he’d worked under.

The magazine mentioned Mourinho, Van Gaal, Simeone, Villas-Boas and Jardim, and Falcao replied: “Passarella too… And Jesualdo Ferreira, in Porto. He taught me what an attacker should do, and especially it’s he who corrected me. But to answer your question, I would say that I learned from each of them. Villas-Boas made me share his ambition, this desire to win everything, what we did with Porto. At Atletico, Simeone then recovered a more mature Falcao. Jardim, in Monaco, gave me his confidence. It was important.

“Van Gaal, he’s special. He’s someone who says things in the face. That’s pretty positive. But he is very ingrained with his philosophy, and sometimes it’s a bit weird. I am very proud, however, to have worked with him.” 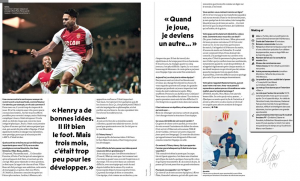 Having not mentioned his manager at Chelsea, France Football pushed and asked directly about Mourinho: “I arrived in his third year at Chelsea when everything went wrong. I only spent four months with him. I didn’t see the real Mourinho.”