Arsenal and Tottenham may be handed a second shot at AC Milan midfielder Franck Kessié this summer after seeing January efforts for the player fall by the wayside.

Kessié has been one of the star performers for the Serie A side this season, with a series of impressive performances establishing him as one of the best midfielders in Italy.

He added to his ever-growing reputation in midweek with another impressive display against Manchester United in AC Milan’s 1-1 draw in the Europa League.

That display only helped to confirm he is on the rise, and that has AC Milan worried about losing him, particularly as his contract expires in 2022.

Tuttosport look at that today and explain that the midfielder has ‘been on the radar’ of the ‘main English clubs’ for years, and the Premier League is considered as ‘his ideal league’.

Those ‘sirens’ have been aimed his way for years, but as recently as January, it was Arsenal and Tottenham making efforts to try and bring him to the club.

That never happened, but the idea of a move to England is a strong one, with it felt the Premier League is the ‘right championship’ to enhance his skill and take him to another level entirely.

The problem for Milan is his contract situation. With his current deal expiring in 2022, they will not be able to sell him for the kind of price he should be demanding this summer but a ‘reduced’ one.

Secondly, there is also a worry that clubs will simply leave him in Milan for a year to continue developing and then take him next year at zero cost. 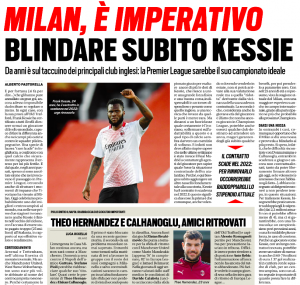 The situations with Gianluigi Donnarumma and Hakan Çalhanoğlu have taught them not to waste time in the matter, and to keep Kessié; they will need to double his salary from €2.2m to €4m at least.

Doing so would either guarantee ‘a champion for the next years or a formidable capital gain, in case of sale.’

Until that new deal is signed, though, his future is in the air, and the situation is one both Arsenal and Tottenham would do well to keep track of having already shown an interest this year.