As A Bola said the deal was ‘close’, O Jogo went further and gave the transfer as certain. The latter said the player’s salary was originally a problem, but was already sorted.

It sounded pretty strange to us, because when speaking to Melo’s agent Carlos Neto on Friday, we were told that the midfielder’s situation with SheffieldWednesday was still to be defined. 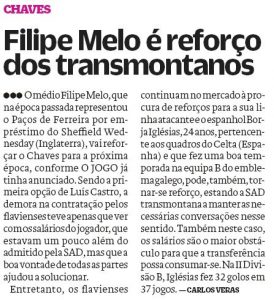 The agent explained he “still doesn’t know Sheffield Wednesday’s decision”, as the sides interested in the player are  “some medium clubs who have no resources to pay the salary he earns at Sheffield Wednesday”, and the midfielder “wants to stay England if to be used regularly”.

That’s why we had to contact the representative once again on Saturday morning. His response to the reports was simple: “No! Not at all! This is pure speculation!”

Melo joined Sheffield Wednesday in February 2015, but his bad luck with injuries only allowed him to play six games for the club. In the last January window, he was sent to Paços de Ferreira on loan to get some game time, and after proving his fitness, he could now have his first real chance to play a full season for The Owls.