Willian José’s two goals against Córdoba CF on Wednesday helped Real Sociedad progress to the next round of the Copa del Rey.

According to AS, the 29-year-old’s second half brace was his last contribution to the La Liga side as he is ‘going to’ Wolverhampton Wanderers.

Wolves have been without the services of Raúl Jiménez since he fractured his skull against Arsenal at the end of November.

The Mexico international’s absence due to the serious injury has left a void at Molineux, which is why the Wanderers are searching for a new striker.

AS explain Nuno Espírito Santo’s side ‘want’ José, who has spent his recent years at the Spanish club ‘looking for a way out’. The report further adds the ‘investment fund’ that owns his rights are trying to move him in order to ‘make money’.

Wolves’ interest in the striker is also mentioned in today’s edition of Mundo Deportivo.

La Real are willing to finalise his departure to put an end to his four-and-a-half-year spell at Anoeta. 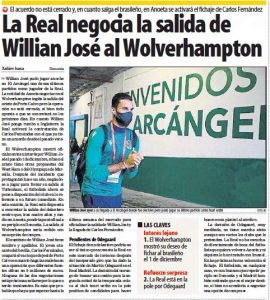 Real Sociedad negotiate with Wolves for the frontman’s transfer, but the deal is still not closed. However, ‘everything indicates’ it will be concluded in the coming days.

According to Mundo, the Spanish side will activate the operation to sign Carlos Fernández once José sets foot in England.

The latter’s move to Wolves will be on loan with a purchase option.