Brighton & Hove Albion’s Marc Cucurella has emerged as a target for Manchester City this summer.

The Citizens have already secured deals for Erling Haaland and Julián Álvarez and are still looking to further bolster their squad for the new season.

This has already been confirmed by Khaldoon Al Mubarak, who stated City are looking to bring in two new players this summer. One of them could be the Seagulls defender.

Brighton took the 23-year-old from Getafe last summer and the left-back impressed in his first season in England. Although he had only two assists from 38 matches, his displays have convinced Pep Guardiola.

Mundo Deporitvo explain the manager ‘intends to shore up’ the left-back position with Graham Potter’s man. The Citizens have established contacts for the Spaniard’s transfer, but don’t specify whether it is with Brighton, the player’s camp or both.

It’s claimed that if these contacts don’t go ‘awry’, then ‘everything indicates’ that City will announce Cucurella’s signing in the ‘next few days’. 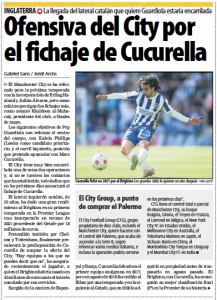 Chelsea and Tottenham Hotspur have also shown interest in the fullback.

Despite this, the former Barcelona man’s willingness to accept City’s offer will ‘finally prevail’, given Cucurella has made it clear that it will be hard to say no to them.

“If the opportunity arises, you have to take advantage of it. There are teams that you can’t say no to,” Cucurella told Gerard Romero in May when quizzed about Manchester City interest.