Following their change of ownership, AS Roma have been on the lookout for a new director of football.

They’ve yet to find their man, with multiple names being looked at, such as Leeds United’s Victor Orta, before being dismissed.

The last one to be rejected was Lille’s Luis Campos, but there’s a new name on the table: Everton’s Marcel Brands.

According to Il Tempo, the Serie A side have decided to hire Retexo Intelligence, founded by a man named Charles Gould, to ‘select the most suitable profiles’ for the role, ‘listing their strengths and weaknesses, as well as all their purchases and discoveries of talent’.

The company was also asked to ‘meet some very specific criteria’ in their search, which is why ‘it’s no coincidence that most of the names released in recent months are young and very close to the world of scouting’.

The Friedkins are ‘personally taking care’ of the issue, and they are ready to ‘reduce the deadlines’, which is why they’ve moved away from Campos. 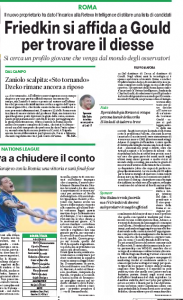 However, ‘in the running, there is also Brands of Everton’.

The Dutchman has been key to the revamp at Goodison Park over the past year and a bit, helping Carlo Ancelotti put together a very competitive squad, earning praise from the Toffees’ fanbase in the process.

He is certainly a man of renown in the footballing world, and is the kind of director of football you would expect a team like Roma to target.

Their main issue here, of course, will be convincing him to leave his very comfortable job in the Premier League, where he has already had a big impact and is close to being revered.