For the past couple of weeks, we’ve seen the ups and downs of the rumours linking Chelsea to Jesus Corona from Porto.

Despite first claims saying the Blues were chasing the midfielder, it was soon reported the club had given up on the signing as they intend to focus on other targets.

But that doesn’t mean the player has missed out on a chance to move to the Premier League this summer. That’s because according to the Mexican media, Everton and Wolverhampton Wanderers are both options for him.

It’s newspaper El Universal who brings a short story on the 27-year-old today, saying he can ‘still play in England’, regardless of Chelsea’s stance. 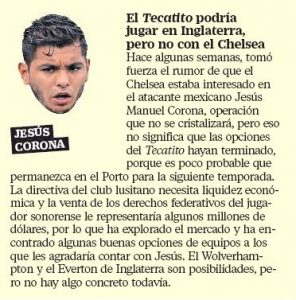 It’s claimed it’s ‘unlikely’ that Corona will stay at Porto for next season. The Dragons are in need of money, and after probing the transfer market, the club found out there are good suitors to land the Mexican player.

That’s where El Universal says Everton and Wolves are possibilities for Corona, even though there’s nothing concrete in their chase for now.