Either Everton have been taking a big fancy towards Espanyol recently, or they’re being used to market the club’s players and up their perceived value.

A few days ago it was reported in Spain that Everton had made a €20m approach for Aaron Martin during the January transfer window. Espanyol had knocked the offer back after having a meeting to discuss the situation.

It was claimed Espanyol believe they can get closer to Aaron’s €30m release clause by waiting until the summer, and then seeing what interest comes in for the 20 year old left back.

The Premier League club were ‘willing to invest’ €8-10m in the former Real Madrid player. 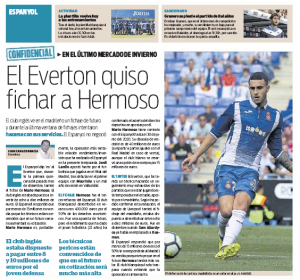 are due 50% of any fee. Hermoso came through the Real Madrid youth system before signing for Espanyol last summer.

Again it’s stated Espanyol didn’t want to sell, feeling they can get more in the future.

Everton had been ‘doing a very exhaustive monitoring of the games that are being played this season in the stadium’, which makes it sound, if it’s not all made up for Espanyol PR, that Steve Walsh is targeting the club.