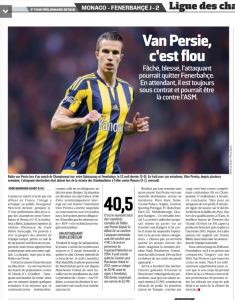 Robin van Persie has a chance to secure himself a new club this week, according to French newspaper L’Equipe on Monday. It’s explained that the former Arsenal and Manchester United superstar is very unhappy with his situation at Fenerbahce.

Van Persie has made the club aware he wants out, and his relationship with manager Vitor Pereira is said to be ‘strained’.

Always concerned about keeping himself in peak condition, Van Persie took a physio with him from Manchester United, to give himself a personal member of staff to help conditioning.

Fenerbahce didn’t have a problem with this, several players do it these days, but L’Equipe explain that now the club won’t allow Matt Radcliffe on their premises, which seems a little over the top.

Van Persie is ‘angry and hurt’ say L’Equipe, and could find a new home with a good performance against AS Monaco, in a Champions League qualifier. The newspaper list the clubs linked as: ‘West Ham, Stoke, Crystal Palace, Napoli, Everton, Sporting Lisbon, Barcelona, PSG, Middlesbrough, Rangers.’

The Premier League clubs perhaps look the likeliest option at this stage for Van Persie, given his success with Arsenal and Manchester United. Everton and West Ham are no doubt among the more ‘sensible’ destinations which L’Equipe refer to.