Having already signed Issa Diop to help the centre of their defence, West Ham aren’t quite done bolstering that particular area of the pitch if the Italian media are to be believed.

The 26-year-old centre-back spent last season on loan at Sampdoria to get some first-team action, which is exactly what happened since he made 31 appearances in all competitions for the Serie A club.

However, now back at Sassuolo, the defender could be on his way out of Italy, as Corriere claim two Premier League sides, West Ham and Everton, are after him. 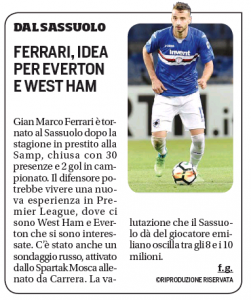 The Hammers’ interest isn’t anything new, with Gianluca Di Marzio reporting it towards the end of June, but the Toffees’ is, and we’ve got an idea where it originated.

Recently, we’ve noticed a number of ‘rumours’ start abroad popping out of nowhere, and our quick searches in the matter reveal a worrying trend.

Much like the suspicious Felipe Caicedo to Leeds stories we’ve been covering lately, this one appears to originate from an HITC opinion piece titled “Should Everton challenge West Ham for Gianmarco Ferrari?”.

That’s the only mention we’ve seen of the Toffees being ‘linked’ with the Italian defender, and there’s a good chance it’s developed into something it’s not.

We’ll have to wait and see, but if this continues, it’s going to make what we do already more difficult.