Sporting midfielder William Carvalho has reportedly been told he could be sold by the club in the next summer transfer window.

According to Tuesday’s edition of O Jogo, the Lions are looking to bring in some cash and will make the 24-year-old available for only €25m. That sounds like good news for Everton, West Brom, and any other interested clubs.

During Carvalho’s early years at Sporting, he was linked to several European giants, including Manchester United and Arsenal. The Gunners are even mentioned in O Jogo’s article, as they were one of the clubs who reportedly opened talks in the past.

But things started getting more serious last summer, when clubs such as Everton and West Brom were said to be strongly interested. The only official offer arrived from the Baggies, who had a €30m bid rejected. 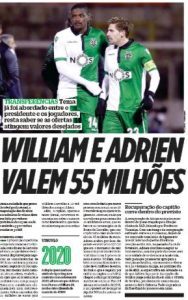 Carvalho has a €45m release clause, so there wasn’t much these clubs could do at the time. But now, the price is obviously more attractive Euro 2016 winner, and if Sporting are really making him available for that price, it’s highly unlikely he’ll remain at the club.

Such a stance from Sporting ahead of the summer window seems overly generous for the club, and a price drop would normally be something done at a later stage to entice interest. Nevertheless, if the O Jogo claims are correct, West Brom or Everton could get themselves a well priced deal.