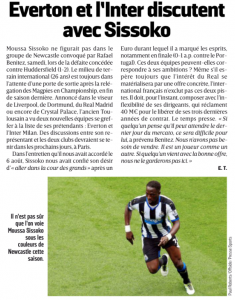 There’s yet another twist in the Moussa Sissoko files, with French newspaper L’Equipe explaining in their Tuesday edition that Everton are set for talks to sign the player.

L’Equipe say that Real Madrid, Borussia Dortmund, Liverpool and Crystal Palace have all been seriously linked with interest in the Newcastle United midfielder, but now there’s further competition.

Everton, and also Inter Milan, are to be set to hold talks with the player’s representatives in Paris over the next few days.

That’s all well and good, but Everton and Inter can agree what they like with Sissoko, it’s Newcastle United who are demanding €40m for the player.

L’Equipe aren’t convinced either Everton or Inter match the player’s ambitions, with those ambitions seemingly based on a couple of good France performances rather than the entirety of his last season with Newcastle United.

Sissoko is said to be hanging on to see if Real Madrid swoop in… aren’t we all.

Liverpool and Crystal Palace may well retain an interest, more so if the former sell Lucas Leiva, but the €40m asking price just seems poor value for money if based upon his last season.