The reports regarding Everton’s chase for Sporting midfielder Matheus Nunes have been quiet for a while, and that clearly sounded like the Toffees may have given up on the deal.

Now it turns out that the saga is back on and mentioned by two Portuguese outlets today, with the interesting thing being that each of them has something different thing to say.

Let’s start with Correio da Manhã, who claims that Nunes should no longer leave Sporting this summer.

They recall that the player was considered to be very close to Everton, with a €20m deal being reported. However, it’s pointed out that the offer was never made, so the Brazilian is now expected to start the season with the Lions and stay at the club.

Even though there’s clearly no confidence that the Toffees will still come for him, Correio da Manhã still adds that Sporting president Frederico Varandas wouldn’t close doors to a sale of over €20m.

Now as newspaper Record also writes about the player, they point out that Nunes actually could still leave the club, especially after the signing of Manuel Ugarte. 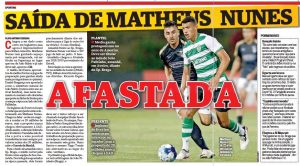 It’s said that Everton ‘continue to follow the midfielder’ and the ‘talks could be resumed’.

They explain the transfer had been in an advanced stage, but the fact that Rafa Benitez took charge instead of Nuno Espírito Santo has ‘delayed the situation’.

Still, Record claims that the Toffees ‘remain well attentive’ because the Spanish coach ‘liked what he saw and heard’ about Matheus Nunes.

The outlet says Sporting would accept to sell the player for €18m.