Sporting and Everton have put an end to the talks for João Virgínia, according to reports from Portugal today.

Newspaper Record writes that after a week of conversations between Lions and Toffees, the clubs could not reach an agreement for the goalkeeper’s new transfer.

Virgínia had already spent this season on loan at Sporting. Since he wasn’t used a lot, the Lions were hoping to find another way of keeping him, instead of triggering the €5m buying option.

The Lisbon side first tried a new loan, then a discount in the price for the permanent move, and both possibilities were blocked by Everton, who demanded the original amount. 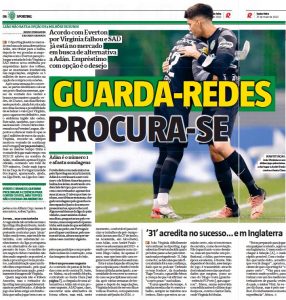 Record still points out that Virgínia was interested in staying at Sporting, despite the little playing time he had at the club, but he’s now set to return to Everton, where he has a contract running until 2024.

With the Lions giving up on the negotiations, they’re now set to look for another goalkeeper who can be an alternative for Antonio Adan during the season.