Home Europe Everton signing ‘practically certain’ – Has nothing to do with new Toffees...
SHARE

After claims midweek that a move to Everton was imminent, the Portuguese sport newspapers were quiet on Friday regarding Matheus Nunes.

There were claims from Portuguese TV backing up the general idea of a move, but it wasn’t presented as something which would be happening within hours.

Sources contacted by Sport Witness later confirmed talks are in place between the Toffees and Sporting, although there was a feeling things could drag on.

Saturday’s edition of Record has a positive slant, and it’s stated the midfielder’s transfer is now ‘practically certain’. The newspaper, who insist it’s their own information, say the general terms of an agreement have been settled between Everton and Sporting. 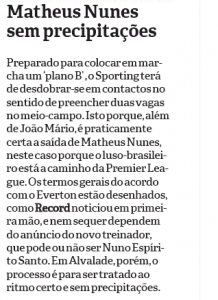 They do, however, point out that Sporting are taking things calmly and there’s ‘no haste’ with regards to getting a deal completed.

Matheus Nunes moving to Goodison Park is said to have nothing to do with whoever will be the new Everton manager, with Nuno Espirito Santo again mentioned as a possibility.