The ex-Juventus coach is no longer in charge at Stamford Bridge and has been replaced by Maurizio Sarri, which could change the transfer outcome of several players.

Today’s edition of French newspaper L’Equipe claims 24-year-old Batshuayi is attracting interest from clubs in England and across Europe. Everton have ‘shown interest’ in the forward. and Borussia Dortmund would like to take him on loan again.

The Merseyside club will face competition from BVB in any race, and can also add Sevilla, Valencia and Atletico Madrid to that list. 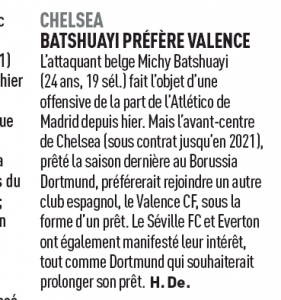 As far as L’Equipe are concerned, Batshuayi’s preference would be to join Valencia on loan for the season. The Spanish club’s local media have been covering a possible move for over a week, but it all depends on what terms Chelsea want.

If it’s a permanent sale, and if Everton are ready to pay for such, perhaps it’s unlikely Valencia would have the funds to compete.