Everton’s Morgan Schneiderlin is confident of completing a move to Nice, who are keen to take him from Goodison Park this summer.

That’s according to L’Equipe, who report the French midfielder is keen to complete a move to the Ligue 1 side.

The newspaper explains that Nice are looking to match their youthful signings this summer with experienced ones and have identified Schneiderlin as one of the latter.

They believe he has a ‘solid CV’ and a ‘good knowledge the top-level’ after ten years in the Premier League and thus ‘ticks all the boxes’ as far as those in charge of transfers are concerned.

They have contacted the Everton midfielder in the last few days, and the initial feedback from him has been positive.

Schneiderlin, it is claimed, is very keen on the move and does not hide his ‘enthusiasm’ behind the scenes. A return to France appeals to him, something he has shared with former and current teammates alike.

Indeed, according to Nice-Matin, a deal has already been struck between him and the French club, and Nice are now working on a deal with Everton.

His deal at Goodison Park expires next summer, and they value Schneiderlin between €8-10m, which is considered an ‘affordable amount’ by Nice. 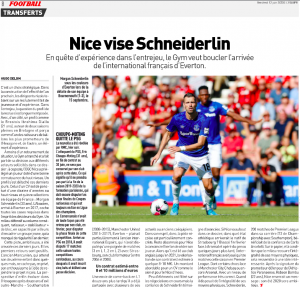 So far, there have been few details discussed, but Schneiderlin’s confidence in the move being completed is ‘very high’ even at this early stage in the negotiations.

It is doubtful Everton will stand in his way given he is not a regular under Carlo Ancelotti, who has preferred others ahead of him and made it clear he wants to strengthen his midfield this summer.

Indeed, they will consider anything close to €10m as an excellent price for a player they don’t want, given they will also be taking another set of high wages off their books in the process.