Everton midfielder Morgan Schneiderlin is expected to travel to Nice in ‘the next few hours’ to undergo a medical before agreeing his move to the Ligue 1 club.

That’s according to RMC Sport, who say the Frenchman ‘is expected’ to become the club’s third transfer signing this summer.

RMC report that both the player and Everton have reached an agreement over a deal for the 30-year-old to make the return to his homeland.

They do not make clear the status of the transfer in terms of price package or wages, just that there is an agreement in place and he is now expected to travel to France to undergo his medical. 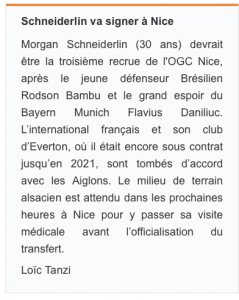 It is likely, however, that the price involved will be somewhere in the €2m range, with several reports from France over the last week indicating that Nice had negotiated Everton down from a higher point in the course of their negotiations.

Once a medical is completed the transfer will be’ made official’, bringing about an end to a three-year stay at Everton for Schneiderlin, who joined in a £20.7m deal from Manchester United in 2017.