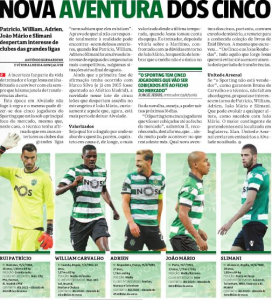 In the past few months, the Portuguese newspapers have picked Everton as one of the favourite destinations for players from the local league. That was only helped when former Benfica manager Ronald Koeman took over at the Merseyside club.

Today, Record has an article listing five aces who could be leaving Sporting before the window shuts, and link the Toffees to three of them.

Rui Patrício, William Carvalho and Adrien Silva are all said to be wanted by Everton, although the newspaper can’t give any updates on their situations.

To summarise Record’s story, Everton reportedly haven’t made any bids for these players, and they’d face competition if they did. Manchester City for Patrício; Chelsea, Arsenal and Manchester United for Carvalho; and Tottenham for Adrien.

The other players mentioned in Record’s article are João Mário and Islam Slimani. The Algerian striker isn’t named as an Everton target anymore, but he’s already been linked to the Toffees this year. It seems the interest has gone cold, or maybe the paper decided to vary the clubs a little bit.