It’s been a few years since Everton have been linked to Benfica striker Haris Seferovic, with several reports claiming the Toffees were after his signing.

Still, as newspaper Correio da Manhã now brings a story on this chase, the interest from the Toffees is highlighted as something new, since it’s apparently Rafa Benitez who has his signing approved.

The newspaper writes that Everton are ‘the most recent’ club to join the race for Seferovic, since other sides such as West Ham and Wolverhampton had already shown their intentions.

It’s said the Goodison Park side could lose Dominc Calvert-Lewin and Richarlison this summer, and since they’ve been approaching the market for potential replacements, the Benfica star shows up as a solution. 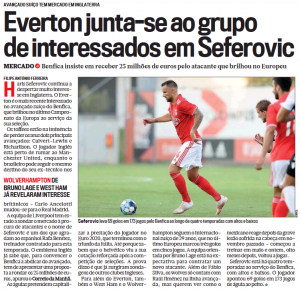 Seferovic is said to be one of the names who ‘pleases’ Rafa Benitez, and Everton are claimed to be aware that to achieve the signing, they must present an offer of around €25m.

That’s how much Benfica are expecting to make from the sale, especially with the good Euros he’s just had, having scored two goals against France.