Left out of the Italy U21 squad that beat Belgium recently alongside his good friend Nicolo Zaniolo for ‘not respecting rules’, Moise Kean has become the centre of attention in Italy in the Juventus section of the media.

Contracted to the Serie A champions until 2020, the young forward was expected to see his contract renewed soon, but there’s still been no signature, with talks between Mino Raiola and the Italians currently ongoing.

De Ligt is believed to be the main subject in these conversations, yet Kean, who attracted plenty of interest from Everton back in January, and his future have also been brought up.

The newspaper explain both Ajax and the Toffees were keen on the Italy international a few months ago, but the youngster had agreed to ignore them in favour of staying at Juventus for the second half of the season. 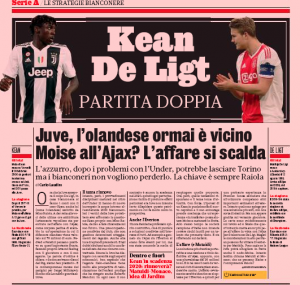 With the situation now as it is, and the Italians far from happy with what went down on international duty, those ‘temptations’ have returned, and his entourage are ‘becoming aware’ that an experience abroad could help the 19-year-old ‘mature quickly’.

As things stand, Gazzetta state Juventus aren’t willing to take risks on a talent who ‘promises so much’, and are currently ‘reflecting on what to do’.

Two routes are mentioned: one is a sale to either Ajax (which could help facilitate the De Ligt transfer) or Everton for €30m or so, while the other (which the player isn’t that excited about) would be an ‘elastic’ deal, meaning a loan with a view to return to Turin.

Calciomercato are the second outlet reporting on Everton’s return to the fore, as Mino Raiola told the Italian side the Toffees are ‘ready to relaunch their offer of €30m in case of an opening’, as Ajax also stand by.

Juventus have ‘registered’ the interest’, and it’s pointed out Kean isn’t ‘untransferable’.

However, for the Serie A side to consider a sale, they will need an offer they ‘really can’t refuse’.

Kean is said to want ‘space’ and an ‘important role’ and both Everton and Ajax can offer that.

The real question at this stage is: can Juventus?