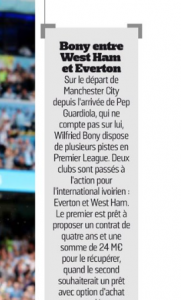 Manchester City could offload Eliaquim Mangala, Samir Nasri, and Wilfried Bony in the final days of the transfer window.

Bony hasn’t featured in any Premier League matches under Pep Guardiola until now, and it’s unlikely he is a part of the Spaniard’s future plans at Manchester City.

Everton are reportedly ready to make an offer of around €24m/£20m to Manchester City, and offer a four-year contract to Bony. West Ham, who recently signed Simone Zaza, would want to sign the Ivorian international on loan.

L’Equipe say today could be crucial as the player is expected to make a decision on his future.

Everton seem to have an advantage as they want Bony on a permanent basis, and there is a chance the player might also want to seal a permanent move away from Manchester City as Guardiola clearly doesn’t seem to be a big fan.