While Everton have been linked with some incomings this January, outgoings are also on the agenda.

One of the names often mentioned as a potential exit from Goodison Park has been Bernard, whom Carlo Ancelotti has used sparingly this season.

The Brazilian has a great admirer over in Italy in the shape of Paulo Fonseca, his former manager at Shakhtar Donetsk, and the Portuguese wouldn’t mind a reunion in the coming weeks.

That’s reiterated by Gazzetta dello Sport both in their newspaper and online on Monday, with the print edition simply stating ‘the paths leading to Bernard and El Shaarawy remain open’.

But it’s on their website where we find far more detail, where it’s explained the Everton forward ‘costs €15m’.

The fact Fonseca has managed Bernard before is a big plus, as is the fact Robin Olsen is currently on loan at Goodison Park, whom the Toffees reportedly want to sign permanently. 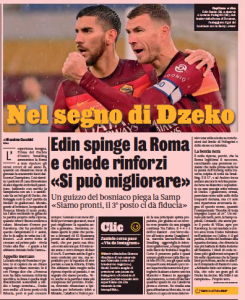 A sale there could bring in around €6-7m for AS Roma, which they could then use to lower the demands for the winger they so desire.

Add on top of that the potential sale of Amadou Diawara in England for somewhere between €12-15m, and Bernard’s transfer fee is pretty much covered.

What isn’t, however, is his wages, which ‘scare Roma a little’, as he wants around €3.5m/year compared to El Shaarawy, who would be content with €1.7-1.8m/year.

We’ll have to wait and see, but if they can somehow overcome the salary issue and sell Olsen at the very least, this could be feasible.