Home Europe Everton with player ‘on the radar’ – Toffees all set up for...
SHARE

Sardar Azmoun is being lined up to leave Zenit in the summer window, with his agent Fali Ramadani thought to be in touch with clubs about a potential move.

A couple of days ago it was reported West Ham have contacted both the agent and Zenit about a potential summer move.

Zenit were thought to be looking at around €25-30m for the 25 year old attacker, who they signed in February 2019 from Rubin Kazan. Azmoun, a striker, has scored 14 goals in 29 matches for Zenit this season, and added seven assists.

Monday’s edition of AS brings Everton back into the picture. Carlo Ancelotti’s side have been linked previously, yet dropped out of the rumours in recent days.

Leicester are also said to be following the player, yet there’s no mention of West Ham this time. 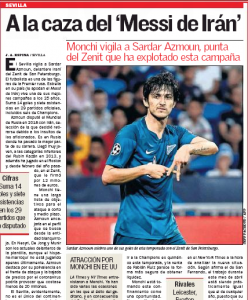 A problem for Everton would be interest from Sevilla. The La Liga club’s Sports Director Monchi is well known for finding unpolished gems and getting them for reasonable fees, often then selling on for a profit.

However, AS state there may be a possibility of Zenit selling for less than €20m given the Covid-19 crisis and how it’s impacted football. The Russian club paid around £11m for the player, so that would still represent a profit.

Azmoun is ‘on the radar’ for Everton, and they’d be lined up for a tussle with Sevilla.