Kevin Mirallas struggled during his loan spells at Olympiakos and Fiorentina in the last 18 months and with less than a year left on his contract at Everton, his future is likely away from Goodison Park.

On August 28th, Nord Éclair explained Antwerp and Club Brugge are interested in the 31-year-old. It was also stated the former are pushing hard to sign the winger and are willing to meet his salary demands to bring him to the club.

Het Nieuwsblad on Thursday claims the Belgium international is keen on returning to his homeland. Though there’s interest from foreign clubs, his idea is return to the Jupiler Pro League.

Mirallas is no longer included in Marco Silva’s plans and the Toffees want to get rid of him in this window, rather than losing him as a free agent in 2020.

Antwerp looked at the idea of signing Mirallas earlier this summer, but they were unable to match his current salary.

However, a last minute deal could see the price reduced as Everton become more desperate to offload the Belgian. 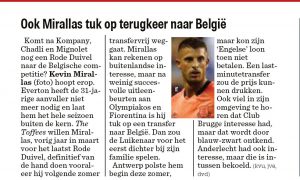 As for Brugge’s interest, Het Nieuwsblad state that has been denied by the club.

Anderlecht were also interested in the player at some point over the summer, but the idea of signing the Everton attacker has now cooled off.

It remains to be seen if there would be new developments in the final days of the window.