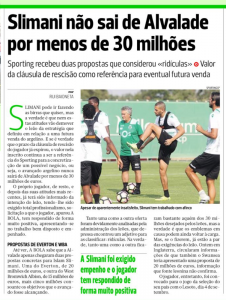 Everton have reportedly outbid West Brom in the battle to sign Islam Slimani. Portuguese newspaper A Bola says the Toffees offered €20m for the striker, surpassing the Baggies’ €15m bid.

In a very dismissive paragraph, the newspaper reveals Sporting’s reactions to both offers: Both one as the other offer were duly considered by the Lion’s management, who quickly found an adjective to describe them: ridiculous.

The newspaper says that despite rumours stating otherwise, sources from the Portuguese club haven’t confirmeda €20m bid from Swansea City.

Yesterday, Record had claimed that not only Swansea, but West Brom had also bid €20m for the striker, so it looks like the papers have different sources at the club.

But despite the different info, all the outlets agree on something: Sporting won’t let Islam Slimani go for less than €30m.

This all takes us back to the start of the summer, and similar claims about the striker’s future.