Everton are ready to sanction a permanent exit for Moise Kean this summer, with Juventus keen on a reunion if they can do a deal.

That’s according to Tuttosport, who say the Italians are willing to include Adrien Rabiot or Aaron Ramsey to sweeten the deal in Everton’s favour.

It’s explained that after an impressive season on loan with Paris Saint Germain, Juve are convinced that Kean can be ‘useful’ for their forward line as they look for an alternative number nine.

As such, they are ready to make a move to bring him back to the club and are willing to include Rabiot or Ramsey, whose wages they are keen to get off the books anyway, to convince Everton into a sale.

The Blues, for their part, are ‘ready to negotiate’ a deal, with it seemingly decided they will sell up rather than attempting to convince Kean to remain at Goodison Park long-term. 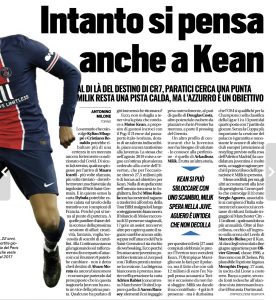 There’s no mention of an asking price from Everton, but it is made clear they won’t ‘sell out’ when it comes to Kean, suggesting they intend to make good money from any sale and not let him go on the cheap.

There is, then, work for Juventus and his agent, Mino Raiola, to be done, but the interest from the Serie A giants is there.

Kean would be more than open to the move as he ‘still likes Juventus a lot’ after emerging at the club earlier in his career.