Home Europe Everton and Newcastle target would rather stay at his club – €20m...
SHARE

With Matheus Nunes now looking likely to stay at Sporting, the Portuguese press starts to explain how important he’ll be for the Lions this season.

Newspaper Record today features a piece claiming that even though the midfielder is a ‘market protagonist’, he wants to stay in Lisbon for one more year.

The outlet names Everton and Newcastle United as two clubs who have been interested in him this summer, as there were ‘strong possibilities’ he could move in a €20m deal.

It’s said that the Brazilian, however, would rather stay at Sporting, where he can grow for one more season and should even sign a new contract as a reward. 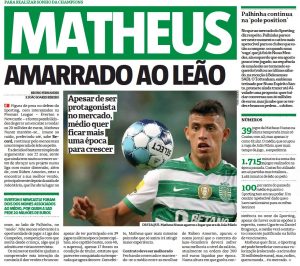 Since Newcastle’s links to Nunes were never as strong as Everton’s, it’s quite interesting to see that both clubs are being put on the same level as two sides keen on taking the midfielder from Sporting this summer.

Earlier today, we featured a piece explaining why the Toffees gave up on the signing, as the problem was never to convince the Lions of a deal, but it was actually the Goodison Park side who decided not to go for the transfer.