It was on the 24th of August that João Virgínia left Everton for Sporting on a loan deal. Looking for more playing time, the Portuguese goalkeeper went to his home country in search for a starting place.

However, as pointed out today in a story from newspaper Record, the 21-year-old is struggling a little to have a chance in Lisbon, even though he seems to have a date set for his debut.

Virgínia is still to feature for Sporting, and should have his first opportunity on the 15th of October, when the Lions play against Belenenses for the Portuguese Cup.

That will be the goalkeeper’s first appearance since the 20th of March, when Everton lost to Manchester City 2-0 in the quarter-finals of the FA Cup. 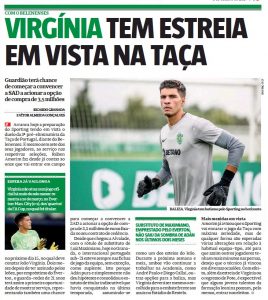 Record says Virgínia will have the chance to ‘start convincing’ Sporting of triggering the buying option they have over him, as the Lions can make his move permanent if paying Everton €3.5m.

It doesn’t look like an easy scenario, since goalkeeper Adán ‘purely and simply didn’t give chances’ for anyone else to take his place in the team.

So if Virgínia wants an opportunity in the league, or even work to move permanently to Portugal, he’ll need to prove himself in the cup next week.