Everton expected to sign Moussa Sissoko during the last summer transfer window, and it may have been better for all involved if that transfer had gone through.

Tottenham swooped in at the end and in a deal worth €35m, according to L’Equipe, and signed the midfielder from Newcastle United.

The following season wasn’t successful for Sissoko, despite Tottenham having a good campaign. Mauricio Pochettino went to the extent of speaking publicly about his frustrations with the Frenchman, and it was clear something was wrong.

Now comes the time to part, but it’s not proving so easy. L’Equipe say several English clubs have come forward in recent weeks, with Everton the only one named, but the request is a loan.

Everton would prefer a try-before-buy deal and it’s perhaps surprising they have any interest at all, given the way Sissoko skipped them last summer. Daniel Levy isn’t keen 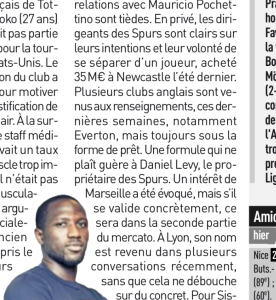 on Tottenham loaning the player out, preferring a permanent transfer.

Marseille have an interest, but L’Equipe believe that even if that turns into something concrete, it will only do so in the second half of the market. Lyon are also linked, but they held ‘several conversations recently, without this leading to something concrete’.

Right now, without assuming about unnamed English clubs, the Everton approach may be the only one in town for Sissoko.