Home Europe Everton made ‘shy enquiry’ for player in January alongside €20m bid for...
SHARE

Everton made a ‘shy enquiry’ for Napoli forward Hirving Lozano in January, not long after submitting a €20m bid for midfielder Allan.

That’s according to Corriere del Mezzogiorno, who cover the situation at Napoli in their piece today.

The Italian side are expected to undergo something of an overhaul in the summer transfer window, with several of their big names all linked with exits.

It has been widely expected that Lozano could move on, with the Mexican having endured a challenging first year at the club after making a record move from PSV Eindhoven last summer.

He has particularly struggled under Gennaro Gattuso since his arrival and was kicked out of training early by the Italian coach not long ago.

Thus, Napoli are ‘thinking about’ recovering the money they paid for him and, among the interested suitors are Everton.

Carlo Ancelotti is a known fan of the forward, having taken him to Napoli in the first place, and Everton’s need for a right-winger means a move would make plenty of sense.

They’ve been the subject of numerous rumours since Ancelotti’s arrival, and according to the newspaper, there was a ‘shy enquiry’ about his availability in the January transfer market.

A move never happened, but it indicates the Toffees are keen and could revive their interest should he be available as expected in the summer. 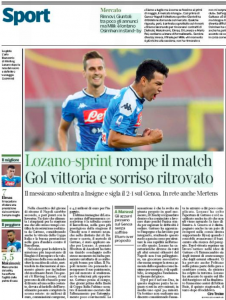 The same can be said of Allan.

Like Lozano, he has been linked with a move to Goodison Park, with Ancelotti thought to consider him the ideal addition for his Blues midfield.

There were numerous reports throughout January – and since then – about Everton’s interest but it seems they made an official bid.

Corriere del Mezzogiorno state there was a €20m plus bonuses bid in the winter window, submitted at the same time as the enquiry for Lozano.

It seems that was rejected, but it shows the ballpark Everton are looking at if they come calling again in the summer.

With reports elsewhere claiming Napoli want at least €40m, there’s a big gap for them to make up, a task they’ll be hoping Director of Football Marcel Brands is up to.