It appears the future of Robin Olsen at AS Roma is going to take centre stage in the next few weeks, as the Italian side prepare for the arrival of José Mourinho.

Unable to find game time in Italy, the Sweden international was sent to Everton on loan, where he managed to make life a bit uncomfortable for Jordan Pickford and win the graces of Carlo Ancelotti.

He may not have been a regular at Goodison Park, but he performed when called upon, and it isn’t entirely unsurprising to see an article suggesting he could stay there an extra season.

It comes from Corriere dello Sport, who, when looking at the future of a few AS Roma players, explain Olsen’s loan ‘could be renewed’, having ‘done his job’ as the second-choice goalkeeper. 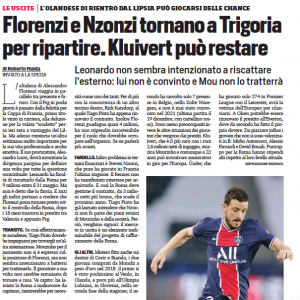 Gazzetta dello Sport corroborate that somewhat in an article on their website, claiming that this is a ‘key week’ for a few players at the Serie A side, as Tiago Pinto, their general director, ‘will have to find accommodation’ for both Steven Nzonzi and Olsen.

That new home could be Everton, although they don’t explicitly mention that, but if Corriere think he could stay and their counterparts believe the Portuguese chief will be looking for somewhere to place the Swede, Goodison Park could very well be that location.