A couple of days after the January transfer window closed, it was reported in Catalonia that Everton had made a €20m offer for Aaron Martin, but had it knocked back.

Espanyol thought about selling the 20 year old left-back, but decided against it because they believe he could bring in €30m in the summer.

Then, a couple of days after that, another Catalan report emerged linking Everton with Mario Hermoso, a 22 year old central defender.

The Toffees had been ‘willing to invest’ €8-10m in the player, according to Sport, but Espanyol knocked it back, asking for €15m, believing they can get more money in the future.

Friday’s edition of Sport goes back to Aaron and claims RB Leipzig also made a January approach, offering €18m. The €30m figure is mentioned once again, with that being Aaron’s clause until June 30th, when it goes up to €40m.

The rejection of Everton’s approach for Hermoso is also mentioned, and for Sport it underlines Espanyol’s stance that only really big offers will be accepted for players who are deemed useful. 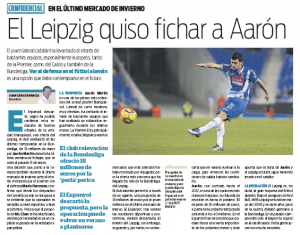 The leaks very much appear to be coming from Espanyol, so either Steve Walsh is keen and he’ll face competition from RB Leipzig, or this is a continuation of what appears a marketing plan on behalf of the Spanish club.

Napoli and both Manchester clubs have also been linked to Aaron Martin. Last summer, Sport claimed a €20m offer from City had arrived, which was then rubbished by the rest of the Spanish media.