Even without a manager in charge at Goodison Park, Everton continue to be linked with players of the Carlo Ancelotti era.

The Italian manager dropped the Toffees for a return to Real Madrid not too long ago, leaving the Premier League club somewhat stranded, with no replacement in place as of yet.

Thankfully, Everton have Marcel Brands in charge of transfers, meaning the market continues to be scoured for potential deals, among which could be Merih Demiral.

The Juventus defender was said to be a target of Ancelotti’s to bolster the centre-back role at Goodison Park, and that appears to still be the case, according to Corriere Torino. 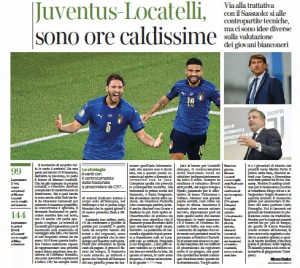 The local newspaper explains that Juventus are looking to sell a handful of their players to fund potential incomings, but the ‘heavy sales’, such as those of Aaron Ramsey and Demiral, ‘will take a little longer’.

For the defender, it’s said that ‘Everton lead the pack of English teams’, while Atalanta are considering him as an alternative to Takehiro Tomiyasu.

It appears Marcel Brands is still doing his job, then, but he faces impressive Champions League qualified competition along the way.