Timo Baumgartl is not a name known to many followers of football.

That’s fair enough, 21 year old Timo plays for Stuttgart in the Bundesliga 2. Despite the footballer’s young age, his birthday was in March, Baumgartl has been important for Stuttgart, racking up 28 league appearances.

Not only has Baumgartl been important in terms of the number of games played, he’s also been one of the better quality performers. Add all of this to the player having Germany recognition up to U21 level, and English interest is no surprise.

In walk Everton, who, along with Watford, are interested in Baumgartl, report German magazine SportBild. It would be a strange rumour to dream up, suggesting there’s genuinely some level of Everton interest in the player. 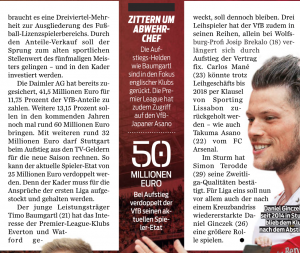 Baumgartl was previously linked with Arsenal interest, but nothing came of it.

If the youngster continues to improve with Stuttgart in the German first division (there’d have to be a 10 goal swing in the last game to deny them now) then Everton’s interest will surely grow, but then Ronald Koeman’s club would likely face stiffer competition.