Club Brugge defender Jack Hendry has revealed Everton wanted to sign him to replace John Stones when he left for Manchester City.

Hendry is currently one of the stars of the show at Brugge, having established himself as a key player since his arrival from KV Oostende in the summer.

He spent last season with Oostende on loan from Celtic, having struggled to prove himself after showing early promise at Celtic Park.

The loan spell proved to be transformative for him, with a series of star performances for the Belgian side earning him a £4.05m move.

Since then, he’s starred domestically in the Champions League and also for Scotland, where he is now a key player under Steve Clarke.

He’s now showing signs of being the defender that many predicted he would be, particularly Everton, who he says were keen to sign him when they lost John Stones to Manchester City in 2016. 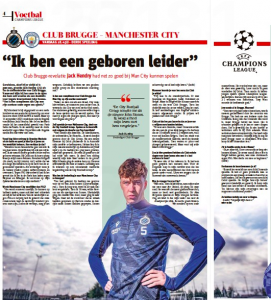 “It could have been. They (Manchester City) had scouted me for the role of John Stones,” he told Gazet van Antwerpen when asked if he was supposed to end up at the Etihad.

“When I was young, I was often compared to him. When I was eighteen, Everton wanted me to succeed Stones.

“Ultimately, that transfer did not happen, but I went to Wigan.

“There, the chairman said that they had taken revenge on Everton for missing out on Stones. Stones has haunted me all my life.”