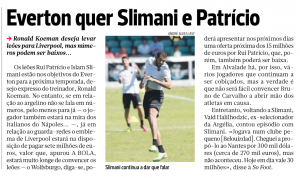 On Sunday, The Sun published an article saying Everton are interested in the signing of Rui Patrício from Sporting. They claimed the goalkeeper could leave the Portuguese club for around £6m.

The story was a big hit in the local press, and today, all three of Portugal’s biggest sporting newspapers have a take on what happened between Everton and Sporting over the weekend.

O Jogo says the Toffees haven’t made any move for the 28-year-old. They claim that despite being linked to English clubs for a long time, Sporting never received a formal bid for the keeper.

In A Bola’s case, they don’t even mention The Sun, and say that Everton are not only interested in Patrício, but also in Islam Slimani. The striker has also been said to be desired by Premier League sides for a while, but the newspaper reawakens this rumour out of nothing.

A Bola claims that no numbers have been mentioned in Slimani’s case so far, but for Rui Patrício, Everton would like to pay €7m, which wouldn’t be enough. According to them, Wolfsburg are set to offer €15m in the next few days, but even that amount may not be enough for Sporting to sell.

Record also claim how hard it would be to buy the Euro hero. They cover The Sun’s article, but rnote how difficult it would be for the player to leave. It’s mentioned that he has a contract until 2022, with a €40m release clause, and the president Bruno de Carvalho wants to keep the goalkeeper as a symbol of the club.

The paper also reports that Everton have shown interest in the midfielder William Carvalho, in a story which we’ve covered with more details here.